Are you about to throw in the towel? Before you do, let me tell you a story.

A story about a former heavyweight champion of the world. A man with grit.

You probably have never heard of James J. Corbett. But you should. His story is one of tenacity, of persevering through sheer force of will.

It’s a story of grit.

Corbett fought in one of the longest bouts in boxing history. It inspired him to say what has become one of my favorite quotations:

As powerful as the quotation is, the story behind it is even better.James Corbett won the World Heavyweight Boxing Championship on September 7, 1892 by defeating the reigning champion John L. Sullivan. It was the first championship bout under the Marquess of Queensberry Rules that — among other things — required boxers to wear gloves.

But the Sullivan fight was not his most memorable. Not by a long-shot.

Peter Jackson was considered the fighter most capable of beating John Sullivan. But Sullivan refused.

“I will not fight a Negro. I never have, and I never shall.” Sullivan said.

Boxing historian John Grombach believed Sullivan used the “color line” because he was afraid of losing to Jackson. And for good reason, which I’ll explain in a moment.

But James Corbett had no such qualms about fighting a black man. The result was a legendary match that tested the limits of what a boxer can endure.

He was known for his footwork. He danced around the ring. He darted away from his opponent’s attacks and then moved in to levy a flurry of punches. It was a drastically different style from the bare-knuckle brawls of the day when fighters stood flat-footed, toe-to-toe, without gloves, and simply traded punches. Legend says that he was the creator of the “left hook,” a devastating blow that has spelled doom for many a fighter throughout the years.

Jackson — sometimes called “The Black Prince” or “Peter the Great” — was strong and incredibly fast. His size, style, and physical appearance has drawn comparisons to Muhammad Ali. Corbett called him, “one of the most intelligent pugilists that ever stepped into the ring.”

He was also the reigning Australian Heavyweight Champion. After winning the title, Jackson had trouble finding a boxer brave enough to fight him. So, he offered to fight guys “right-hand barred.” In other words, he promised he wouldn’t use his right hand. (Not sure why, but picturing that sort of fight makes me smile).

Now it becomes clear why Sullivan refused to fight him.

Tickets sold for up to $50, the highest price ever paid for a boxing match up to that day. 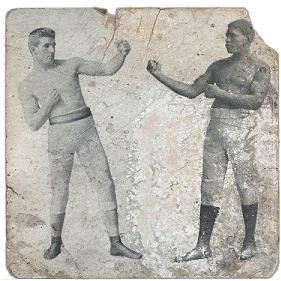 The duration of the match was not specified. It would be a fight-to-the-finish.

The odds were 5-to-1 in favor of Jackson. It was clear…no one expected Corbett to win.

The November 1945 issue of The Ring magazine — quoted here — gave this account of the fight. I’ve edited it for length, but decided to preserve the language choices used by the writer:

On they fought, round after round, minute after minute, clever, crafty, calculating, neither man taking any chances, each respecting the other.

In the fourteenth, Corbett belted a sharp left to the nose. This was Jim’s best punch up to that time.

In the seventeenth, Corbett hurt Peter with two drives to the neck. The Negro drove right and left to the jaw and scored first blood, a distinction back in those diaper days of glove fighting.

As they answered the bell for round No. 18, Jackson poked a left to the jaw but Jim replied with a wallop to the neck – and just as hard.

Jackson kept going without letting Jim get a moment’s rest. They went along into the twenty-sixth, which saw Corbett start moving out in front. In the twenty-seventh, the Negro rallied, but in the twenty-eighth, Jim outhit and outboxed his man and showed a slight advantage.

In the thirtieth, Corbett kept right on rushing his opponent. With this session the more interesting half of the contest may be said to have come to a close.

Did you catch that? The journalist said that the halfway point of the fight was…the 30th round.

And so it was. The match was declared a draw after 61 rounds!

Boxing matches today are limited to 12 rounds. And the fighters are exhausted by the end.

But Jackson and Corbett fought the equivalent of 5 entire boxing matches in one fight. With an extra round thrown in for good measure.

“Grueling” is too shallow of a word to describe it.

Are You about to Quit?

The word “grit” is not used much anymore. A shame. It’s a great word.

As a noun, it means “courage and resolve; strength of character.” But as a verb, it’s even better:

clench (the teeth), especially in order to keep one’s resolve when faced with an unpleasant or painful duty

James Corbett had grit. So did Peter Jackson. What else can explain the force of will it takes to shuffle to the center of the ring after having fought 30 rounds already. Bloodied, wobbling on rubbery legs that lost their vigor 15 rounds before, peering through swollen eyes at a man who simply won’t back down.

Grit is what makes a person think, “I’ll do whatever it takes, fatigue be damned. If I must fight 30 more rounds, so be it. I will not be beaten.”

Grit your teeth. Set your jaw.

And fight one more round.

Questions: What is your story? Has there been a time when you accomplished a life goal through sheer force of will? Share your story in the comments.

How to Make Yourself Indispensable at Work

Rekindle Your Passion by Taking a Sabbatical

You Suck at PowerPoint! (but you can get better)