A Little Help, a Little Hope, and Someone to Believe in Him

“All kids need is a little help, a little hope, and somebody who believes in them.”

One of the radio stations I manage is an Urban Gospel station in St. Louis. For the past several months we’ve been planning a long-term initiative to address economic mobility in the African-American community. We’ve met with nearly a dozen financial institutions and civic organizations in preparation. We’re beginning to get excited about what we may be able to accomplish.

I am nearly always the sole caucasian in the room during these meetings. As such, I spend most of my time asking questions about a community to which I do not belong.

Yesterday we met with an African-American man who is a senior executive of a large regional bank. I’ll call him Stephen.

Stephen said, “Many of the problems with low-income folks are generational. Grandma was on food stamps and mom is on food stamps. So kids grow up thinking that that’s just what people do. We need to show them that there is a better way. We need to break the cycle. If we can do that, we can change a family for generations to come.”

“That’s the big question, isn’t it? Education, mentoring, access to practical information. A major challenge for this community is that even when great opportunities present themselves, people don’t have others around them who can help. They need people they can to turn to for advice.”

“Can you give me an example?”

“Sure. I’ll give you one from my family. My niece is a bright girl. Good student. She was offered a partial scholarship to Wash U.”

“No one in my niece’s immediate family has ever gone to college. So, none of them knew that if Wash U was offering a partial scholarship, chances were very good that other schools would offer her a full scholarship.”

“Thankfully I was able to counsel her. But many low-income kids don’t have an educated family member they can turn to for advice.”

“They don’t know what they don’t know,” I said. “I was in a similar situation when I was her age. I was the first person in my family — other than my uncle — to go to college. And if someone hadn’t intervened, I’m not sure I would’ve gone.”

And so I told him my story, an abbreviated version of what follows.

It was midway through my senior year in high school. I was competing in a speech tournament at Bradley University in Peoria.

I was performing a humorous piece called, “The Forced Marriage,” a farce by French playwright Molière. In the midst of my performance, I heard this guy laughing louder than the rest of the room. It was a peculiar laugh, a mixture of guttural growls and high-pitched cackles that somehow came together in an impossible atonal tone.

I finished my performance and looked to see who the cackler was. I recognized him, though I’d never before spoken to him. It was George Armstrong, the coach of the multiple National Championship winning Bradley University Speech Team. 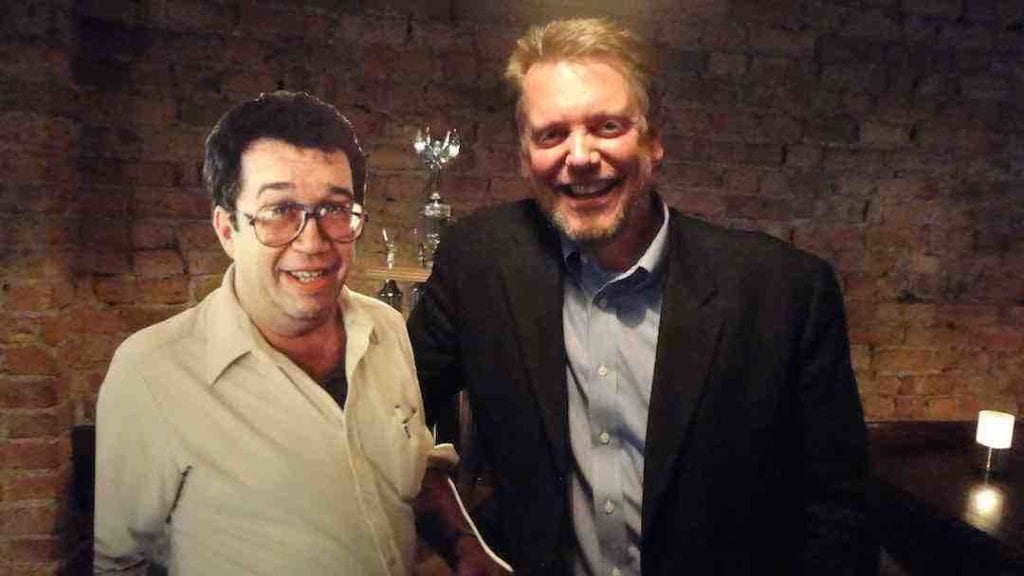 Sadly, I have no pictures of George Armstrong and me back in college. This is a picture of me standing next to a cutout of George at a Bradley Speech Team Reunion (2011).

When the round was over, I left the room and stepped into the hallway. I heard a booming voice yell, “Lhamon!”

I turned to see George walking toward me.

George was a peculiar-looking man. His belly hung over his belt and strained against his sweater. The sweater itself was stained with whatever he’d eaten at lunch. Pea soup, perhaps? A deeply creased forehead separated dark unruly hair from a set of dark unruly eyebrows. He had a wide nose on which sat a pair of Charles Nelson-Reilly sized eyeglasses. His bottom lip was larger than the top and seemed to pull his mouth open because it rarely closed even when he wasn’t speaking.

“Where are you going to college?” George asked.

I hesitated. I was just a few months from graduating high school but hadn’t applied anywhere. I wanted to go but as the son of a single mother I just assumed I couldn’t afford it.

“Don’t worry about that,” he said. “I’ll give you a scholarship. You can compete on the speech team.”

I wish I could adequately describe the smile he smiled at me in that moment. Gigantic. Warm. Sly. Ornery. It filled his entire face, especially his eyes. He cackled again.

“Yes, I’m serious, Greg. Come by my office on Monday afternoon. I’ll get you all set up.”

“Thank you so much, Mr. Armstrong!” I shook his hand vigorously.

He paused and smiled. And then he said two words to me. Words that in the subsequent years I would hear him say to dozens, perhaps hundreds of students who came to him awkward, shy, and insecure desperately needing affirmation.

And then he walked away.

That Monday, George walked me to the registrar’s office where I filled out an application. Then he took me to the financial aid office.

George looked at one of the financial guys and said, “This is Greg Lhamon. He’s coming to Bradley this fall. Give him one of the speech team scholarships” Then he turned aside to the financial guy, blocking my view. He whispered a few things to him privately. I saw the financial aid guy smile and nod. George turned back to me.

“Don’t worry, Greg. Don here is going to fix you up.” And then he smiled that huge smile of his. “Welcome to Bradley!”

Then he walked away.

I got my acceptance letter a week or so later along with my financial aid package. At the top of the aid statement was a really big number. The total tuition price. There was no way my family could afford it.

But below the big number was series of deductions: Pell grants, state and local aid, private scholarships, the speech team scholarship.

I glanced down the long list of negative numbers to the revised total at the bottom.

The number at the bottom, the total balance due was:

I turned to Stephen and said, “I’m sure that my family’s financial situation was a huge factor in all of the aid. Perhaps the biggest factor. It wasn’t my GPA, I assure you. But if that burly man hadn’t been there when I needed him…if George hadn’t been willing to guide me…I probably wouldn’t have gone to college. And I surely wouldn’t be sitting here with you today.”

Stephen smiled. “That’s what it’s going to take to get this done. That’s what kids need. Someone who cares enough to bridge the gap.”

And that’s what we hope to accomplish with this initiative. Because every kid needs someone on his side.

Every kid needs a George Armstrong.

Paying for College: Start a 529 Plan for Your Kids Today

Kevin Durant Did Something Each of Us Should Do

How to Get Noticed When You Apply for a Job Online