Seven Innings with a Vietnam Vet: A Riveting First-Person Account of War

“Before you got reassigned?” I asked.

“No. Before I got killed. Most guys who did what I did in Vietnam were killed within three months. But I beat the odds. I lasted 13 months.”

Jerry grew up in a small Illinois town across the Mississippi River from St. Louis. He’s got an easy smile and a genuine laugh. He’s also an avid St. Louis Cardinals fan, which makes him a good guy in my book. Jerry and I have gotten to know each other because he and his wife Connie have seats next to ours at Busch Stadium.

On this rainy August evening, Dedee and I came to watch the Cardinals take on the visiting Boston Red Sox. The Cardinals were up 1-0 in the third inning.

“How old were you when you went into the service?”

“Are you serious? That’s a third of them.”

“Yeah.” He paused. “A third of my graduating class died over there.”

My mind turned to a few of my buddies. Horrible images came to mind of them torn and bleeding. I shook them away.

“Jerry, I don’t know what to say. I can’t imagine what it must be like to witness your friends die in front of your eyes.”

“It’s terrible. I wouldn’t wish it on anyone.”

Jerry was a medic and parajumper in the Air Force. His job was to rescue downed pilots. His unit would locate the crash site and then board an HH-54 helicopter — “We called it the Jolly Green Giant” — and then fly to the site where the plane had gone down. The helicopter would hover over the wreckage while a cable was lowered to the pilot below.

“How far above the ground were you in the helicopter?” I asked.

I glanced up. “That’s…what? As high as this stadium?”

“We’d lower a cable with a harness. If the guy wasn’t injured too bad then he’d secure himself and we’d pull him up.”

“What if the pilot was badly injured?” I asked.

“Then I’d go down to help. I’d strap him in the harness and we’d lift him up to the chopper. Most times, I’d go up with him. But some times I’d have to wait on the ground.”

“You were left down there? Alone?”

“Five or ten minutes. Just ’til they unhooked him. Then they’d lower the cable down to me.”

“But you were in a combat zone, right?” I asked.

“Did it make you sick to your stomach? I mean, being left down there like that.”

He looked away toward the field but it was clear he was seeing something else. He continued.

“I just knew one of those times I was going to get captured. Down there by myself, looking around in every direction. Eyes peeled, searching for movement in the brush. I thought for sure I’d end up a POW.”

Xander Bogaerts, the shortstop for the Red Sox, doubled to left-center, knocking in a run. The Red Sox had just tied the game. Normally the game would’ve riveted me to my seat. But this night was different. I was held to my seat by a some other force.

“Once the injured guys were lifted into the Jolly Green Giant that’s when my job really started,” he said. “I was a medic, so my job was to tend to them. Try to save them.”

He looked down at his hands.

“To this day, I remember the names of every guy I couldn’t save.”

“How many of them were there?”

“I personally knew seventy-five guys who died in Vietnam.”

I didn’t know what to say. Every word that came to mind seemed inadequate. Shallow. I finally settled on, “I’m sorry.”

“Thanks, Greg. Knowing the names of all those guys makes it very hard to go to the Vietnam Memorial.”

I had visited the Vietnam Memorial the year before. My mom, my sister, and I accompanied my step-dad (a World War II veteran) on an Honor Flight to Washington D.C. A touching but emotionally draining trip.

“Are you drawn to the Memorial? Or does it repel you because it drudges up bad memories?”

The crowd rose to its feet. John Jay was on second with Cardinal third baseman Matt Carpenter up to bat. We stood and cheered with the 44,000+ fans in the stadium. Carpenter hit a ground ball to first base. Inning over. A scoring chance lost.

We settled back into our seats. Jerry and I hadn’t spoken this much in the previous eight games. For some reason, Jerry needed to talk. And I listened.

“I remember my first visit to the Memorial. When I rounded the corner and saw it, I nearly crumpled to the ground. It was overwhelming.”

He paused to gather his thoughts.

“When my head cleared, I started my search for the 75. The men I knew. The men who died. I needed to find their names. When I found the last one…the last man…I broke down. I couldn’t bear it.”

“Jerry…I don’t know what to say. I wish…” My voice trailed off.

For reasons I don’t entirely understand, I felt shame. Not that I have ever betrayed my country or done her wrong. But because by comparison I’ve done so little.

I have never taken up arms to defend my country. Never risked my life for another. I have never hunkered over a fallen comrade, his blood on my face and hands and clothing, and worked with intrepid fever to rescue him from the ravages of an enemy’s weapon.

And never have I witnessed a man slip from this life because his wounds surpassed my ability to save him.

But Jerry has. Never once during those seven innings did he mention the men he saved. Only words for those he could not.

“Jerry,” I said. “I was too young to remember the soldiers who returned from Vietnam. But I know from history that you came home to a country that was deeply divided. Veterans of World War II were celebrated. But I know Vietnam veterans like you did not get a ticker tape parade. You weren’t praised for your sacrifice as you should’ve been. And that’s not right. For what its worth, I want you to know that I appreciate your service to this country.”

“Thanks, Greg. I really appreciate that.”

Agent Orange was a defoliant used by the U.S. military during the Vietnam War. Twenty million gallons of it was dropped in Vietnam and parts of Laos and Cambodia as a part of Operation Ranch Hand, an attempt to deprive the Viet Cong of food and vegetation cover. There have been terrible consequences to Vietnamese citizens and military veterans. The health effects of Agent Orange include increased rates of cancer as well as nerve, digestive, skin, and respiratory disorders.

“We’d walk through the fields while planes and helicopters were flying above us. They’d drop this stuff right on top of us. I could feel it hitting my face. I looked over at a buddy of mine and said, ‘Man, this stuff smells horrible.’ Of course, we were inhaling it.”

“If you don’t mind me asking, what kind of health issues did it cause?”

“Neuropathy and cancer.” He held out his hand. “See how it shakes? That’s the neuropathy. I take medicine for it and it seems to help but it just treats the symptoms. I’ll always have it.”

“Nasal passages. I’ve had three different surgeries. My upper pallet had to be removed.” He smiled. “If I take my teeth out, you can practically see behind my eyeballs.”

There wasn’t a hint of self-pity in his voice.

“I assume the VA covered all your expenses,” I said.

“Funny you should mention that. When I went in for my neuropathy they told me they they wouldn’t pay for my disability.”

“They told me they had no record of me being in the military.”

“Wish I was. I told them I served in Vietnam for 13 months. They told me to prove it. They dragged out a map and said, ‘Show us where you were stationed.’ I pointed out every place I’d been and gave them very specific details. Didn’t work. They continued to deny me my 40% disability payments.”

“How could they have lost your records?” I asked.

“Twenty-two years? How in God’s name could they deny your payments for 22 years?”

“I don’t know,” he said. “After 22 years, I finally called my Congressman. Almost immediately I got covered.”

“Infuriating! That is not how we ought to treat veterans.”

We finished singing “God Bless America” and “Take Me Out to the Ballgame.” Due to a pre-game rain delay, it was pushing 11 o’clock. Dedee and I decided to leave early.

I turned to Jerry and Connie.

“Well, we need to head home. I really enjoyed our conversation, Jerry. Let’s do this again at the next game.”

“I’m 67 years old and have one thing on my bucket list. Just one thing.”

“You’re kidding me! You saw the ’64 World Series? That was Brock and Gibson! My favorite Cardinal players!”

“Yeah, but don’t forget, we were playing the Yankees. So, I got to see Mickey Mantle and Roger Maris too. An incredible series! I’ll remember that game for the rest of my life.”

“Another win for the Cards!” I said. “You’re good luck! That was the year of Ozzie and Willie McGee. Bruce Sutter too.”

“Yeah. But I haven’t seen a game in the new Busch Stadium. So, that’s the one and only item on my bucket list.”

“Well, the Cardinals oughta give you a seat in every World Series game. They win when you show up.”

“Let’s hope they can get there one more time before I kick the bucket.”

“Not sure it’s going to be this year, but I’m rooting for you.”

As Dedee and I walked out of Baseball Heaven, I concluded I’d never had a more meaningful time at the ballpark.

It reminded me that every person has a story. A fascinating and important story. And all it takes to pull it out of them is a question or two. And an ear that longs to listen.

As we stepped out of new Busch, I decided in that moment to add an item to my bucket list:

Get two tickets to the next Cardinals World Series…and ask a certain Vietnam veteran I know to come along.

When a warrior fights not for himself, but for his brothers, when his most passionately sought goal is neither glory nor his own life’s preservation, but to spend his substance for them, his comrades, not to abandon them, not to prove unworthy of them, then his heart truly has achieved contempt for death, and with that he transcends himself and his actions touch the sublime.”

Stephen Pressfield, Gates of Fire: An Epic Novel of the Battle of Thermopylae 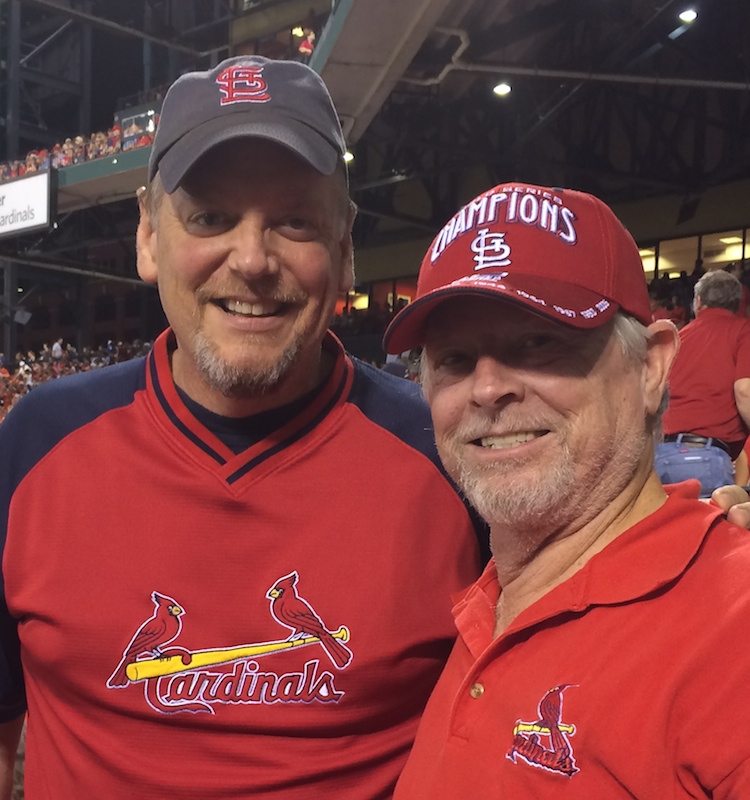 Why I Respect the Guy Who Smells of Rotten Produce