Why I Respect the Guy Who Smells of Rotten Produce

These days, I take a shower before going to work. But I come from a long and proud line of people who shower at the end of the day.

My family worked construction and in factories. We were linemen with the utility company and electricians. More often than not, we fixed our own cars (at least we did in the days when cars were less complicated).

Growing up, we didn’t call a plumber when the faucet was leaking. We fixed it. We had tools and knew how to use them. And if we ever ran up against a problem we couldn’t fix, we’d call a family member to help. And together, we’d figure it out somehow, even if the result was not a textbook solution.

Not many in my family have degrees beyond a high school diploma. My Uncle Rodge was the first to graduate from college. I am the second.

While attending college, I spent nearly every weekend traveling with the Bradley University Speech Team. We gave speeches about politics and rhetoric. We performed selections from short stories and plays. We wore suits and spoke eloquently. The closest we ever came to getting callouses on our hands was when one of the vans broke down and we needed to push it a mile or two to the service station.

As my university years unfolded, I began to achieve some success as a speech team competitor. I wasn’t Michael Jordan; more like Scottie Pippin. A strong competitor but not the superstar.

I guess my new found success started going to my head. I was going places, you know? I had dreams. I was going to show everyone in my hometown that I was on the cusp….that I was somebody.

I didn’t notice the change in me. We rarely see ourselves clearly. But Uncle Rodge did. And he wasn’t about to let it continue.

The Lesson that Changed Me Forever

I remember vividly the conversation. I was riding shotgun with Uncle Rodge one day as we made our way through a construction zone. Men in protective orange vests were busting up asphalt with a jackhammer. That’s when Uncle Rodge gave me the lecture that would change me forever.

“Greg, see those men?” He pointed to the workers in the road. “You and some of your college buddies might look down your noses at those guys. They drive pickup trucks instead of nice cars. They wear work boots and coveralls instead of a suit and tie. But let me tell you something, and I want you to listen very closely. That guy in the hardhat provides a service to this city that is far greater than the contributions made by most guys in white shirts. Do you hear me?”

“When a garbage truck goes by, most people won’t even make eye contact with the guy hanging off the back of it. They look away instead. They feel superior to him. He smells of trash and rotten produce. But hear what I’m saying to you…that man has an honorable job. The day he stops doing his work is the day this city grinds to a halt. Trash piles up around all the pretty homes, and it’s all because that guy is no longer collecting it. Societies can’t function without trash men. Or plumbers. Or construction workers. They provide a vital service to all of us. Respect them for it.”

I was silent, thinking.

“Greg…the measure of a man is not the kind of car he drives or the amount of money he has in the bank. The only measure of a man that amounts to a hill of beans is his heart. Remember that.”

I have never looked at a garbage man the same way since. Uncle Rodge changed me permanently.

How I Try to Apply the Lesson

Today, I try to strike up a conversation with every working man or woman I meet. I get to know them. I try to learn their names. I kibitz with the custodian in the office building. I joke around with the waitress and ask about her life and her kids and her dreams of escaping the restaurant grind. And then I give her a generous tip.

When traveling, I often leave a $5 bill on the dresser with a simple note that says:

Thank you for all you do for me and the other guests. I really appreciate you. Have a great day! 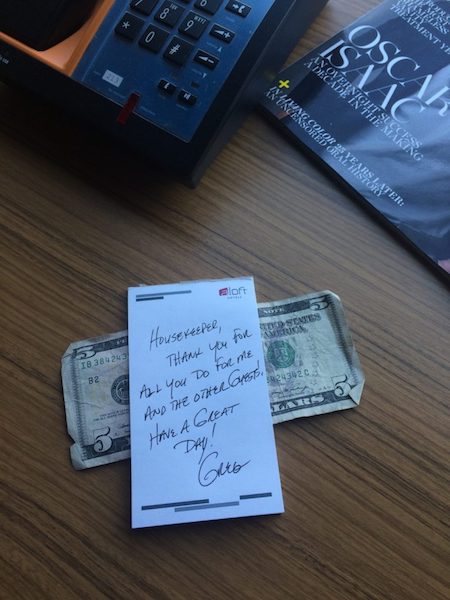 A thank you note, a few bucks, and a pleasant conversation is a terribly small sacrifice. But to the person who is actually doing the work…who is laboring to provide for herself and her family by serving the needs of others…to that person, my small gesture, my modest token of appreciation can help her see the dignity of her work.

It’s a reminder that her job — however humble or menial — is noble.

But mostly, it communicates that she is worthy of my respect. And anything less than that isn’t worth a hill of beans.

What are your thoughts? How do you show your appreciation for the working men and women around you? Share your comments below.

The Next Time You Introduce Someone, Make it Magical!